Three extinct volcanoes, fringed with verdant rainforest on their lower slopes, make up Mgahinga Gorilla National Park. Located 540 kilometres from Kampala and spanning roughly 34km2, Mgahinga is one of Uganda’s  smallest national parks. This picturesque landscape is home to around 300 critically endangered Mountain Gorillas – half the number of the planet’s population of mountain gorilla – who roam between Uganda, Rwanda and the DRC.

Though most travellers visit Mgahinga to see the main attraction – the mountain gorillas – they might not know that they stand on ancient ground that’s of great environmental and historical significance. The word, ‘gahinga’, refers to the volcanic rock that’s found at the base of the park’s three extinct volcanoes, and pays homage to the enduring legacy of this fertile land. During the Pleistocene ice ages, the Virunga Mountains were a haven for mountain flora and fauna, allowing them to survive the extreme climatic changes.

On arrival at the park, just 15 minutes from Ntebeko Gate, explorers will find a viewpoint which offers a scenic overview of the topography of the region.

The Nyakagezi troop – consisting of 2 silverbacks, 3 adult females, 2 juveniles and 2 infants, – are the habituated gorillas of Mgahinga. Visitors should be prepared for a day-long trek through the rainforest, as these giant primates can be elusive and surprisingly silent. Surrounded by some of the earth’s most untouched, protected wilderness, your ranger will guide you through the lush landscape as they explain the behaviour and dynamics of the mountain gorillas.

Wildlife is as unpredictable as the weather, which means there’s a small chance you won’t get to see the gorillas. The guides call on their prior knowledge of the troop – their typical behaviour and location – to help track the troop. Taking note of where they last saw the gorillas the day prior to your trek, the guides will usually return to the same spot. Here, you’re likely to encounter the gorillas. Despite the skill and intuition of the experienced guides, the gorillas go where foraging takes them – which might be far from where humans might wander.

Over and above the resident gorillas, 76 species of mammals also live amidst the foliage of the rainforest. Bush buck, forest elephants, leopards , buffalo, and serval have been spotted. Other primates such as the Black and White Colobus monkey, as well as habituated golden monkeys also swing between the boughs of the rainforest.

Bird-watchers are also in for a treat. Home to over 180 species of birdlife, sightings include the Black Kite, Fiscal Shrike, Crowned Hornbill, Augur Buzzards and Rwenzori Turaco. 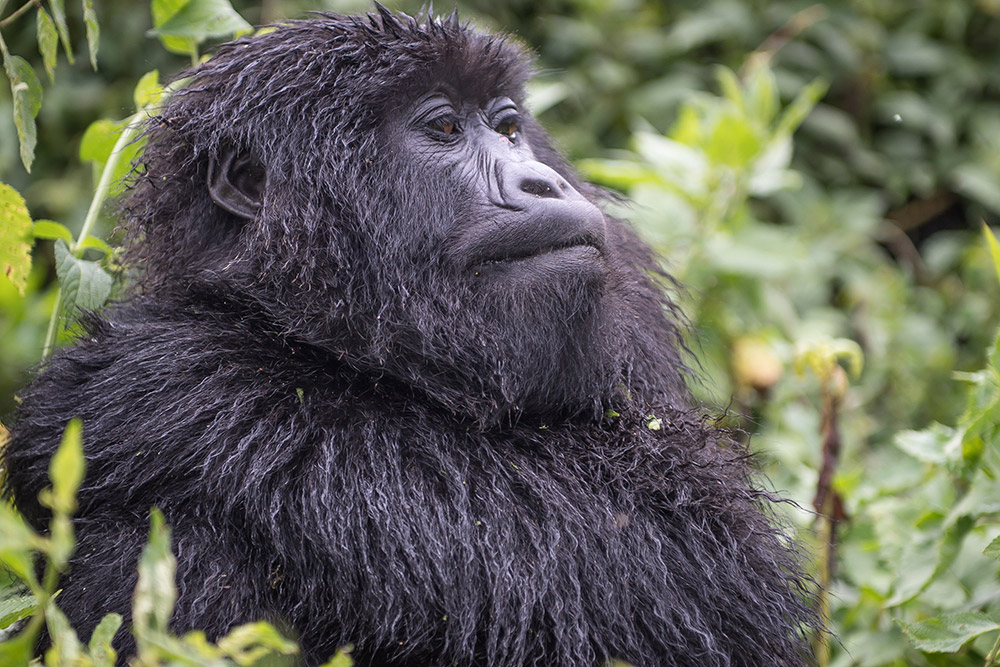 For gorilla trekkers who also enjoy hiking, there’s an opportunity to hiking the three extinct volcano peaks – Mt. Muhavura (4127m), Mt. Sabyinyo (366m) and Mt. Gahinga. Distances to the top of the peaks vary – taking anything from 6 hours to 10 hours –  and the climbs are of an advanced level.